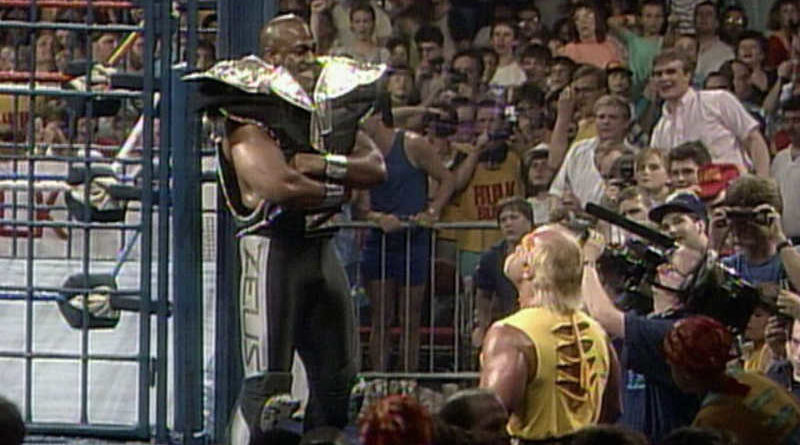 It was May 27th, 1989 on an episode of Saturday Night’s Main Event when Zeus made his debut on WWF television.  I was scared.  By this time WWF was heavily promoting Hulk Hogan’s movie “No Holds Barred” that featured Zeus in it.  As a kid, I could understand that movies were not real, but at the time, wrestling was still very real.

Hulk Hogan was set to fight the Big Boss Man in a steel cage match with no disqualifications and no countouts.  This was the match to settle the score.  The feud with The Mega Powers and The Twin Towers was coming to an end.

The crowd goes crazy as Hulk’s music starts.  Hogan starts walking to the ring like normal as the crowd cheers and screams.  Then Hogan sees him – Zeus – the human wrecking machine.  Hogan stops, shock in his eyes or could that be fear?  How can this be? Why is Zeus here?

Hogan is trying to get into the ring, but Zeus is blocking the way.  Zeus gives Hogan a kick to the head.  Then Zeus begins to crush Hogan with his powerful forearms.  Who is going to stop this monster – there are no disqualifications?  Hogan is helpless.  After a few minutes of Zeus crushing Hogan, he leaves the ring.  Hulk can’t even get into the ring on his own, how is going to defend his title?  Saturday Night’s Main Event will continue after the commercial break!?!?

This was such a great storyline for the WWF.  Tony Lister (who played Zeus) of course couldn’t wrestle, but he didn’t need to.  Hulk Hogan was one of the greatest performers.  He could sell against any monster heel.  The character Zeus didn’t last very long, but he went on to have a few memorable rolls in that years Summerslam as well as the Survivor Series match.

I think even though Zeus was billed as an unstoppable monster, he never won a match!

On a side note, a few years back I was watching Batman – The Dark Knight (one of my favorite movies) and who do I see in the movie, none other than Tony Lister.  He plays the prisoner on the ferry who takes the switch that controls the bomb on the other ferry and throws it into the water.