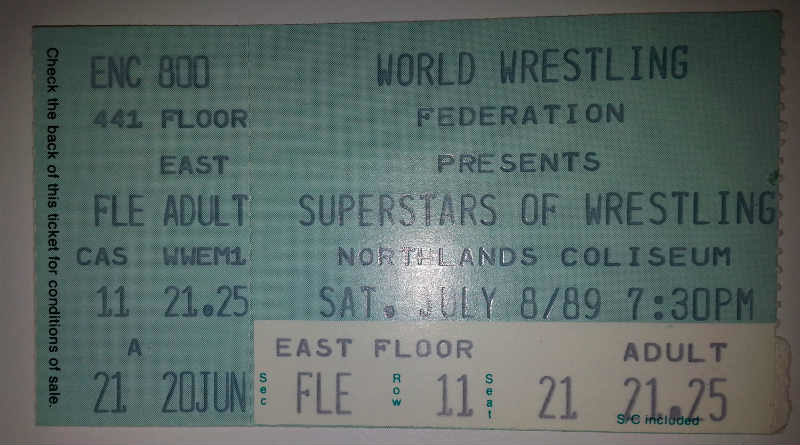 Back in the 80s Hulk Hogan flexed, cupped his hand to his ear, and wrestled his way to the hearts and imagination of millions of people in North America.  I couldn’t turn on the WWE Network and watch wrestling whenever I wanted.  I was a busy kid who loved wrestling, but didn’t know when it was on TV.  To watch wrestling I had to go to the video store and hope there was a new WWF VHS that I hadn’t seen yet.  And if I was really lucky, my parents would take me to watch a live WWF event.

It was July 8th, 1989.  I was at the Northlands Coliseum in Edmonton, Alberta, Canada.  This was the day that I watched my first ever WWF live event!  As you can see by the picture of above, my family and I were sitting on the floor in the 11th row.  The seats were great.

At the time of the event I was one month shy of being 8 years old.  I could not be more excited to watch Hulk Hogan wrestle the “Macho Man” Randy Savage.  Back then I didn’t follow wrestling as closely as I do now.  Meaning I hadn’t watched Wrestlemania V where the Mega Powers Exploded and Hulk Hogan beat the Macho Man to win the WWF title.  For me, this was the first time that I saw Hogan wrestle Savage and I remember it like it was yesterday…

I ran to the guardrail screaming my head off with all of the other Hulkamaniacs.  I stuck my hand out as far as I could reach; hoping, saying my prayers, that Hulk would see my hand in the sea of hands and high five it.  Oh my god there’s Hulk, he’s only 10 feet away high fiving those kids.  At that moment my heart was in my throat; I was so excited.  Then I started to cry; Hulk just switched over to other guardrail and I didn’t get my, much anticipated, high five.  I stood there for a few minutes crying as Hogan continued making his way to the ring.  I finally meandered back to my seat with my parents.

“Jamie!” my Dad says.  “There you are.  I was wondering where you went.  Why are you crying?” ” I went to the guardrail hoping Hulk would see me and high five me.  But, just before he reached where I was standing he walked over to the other side and didn’t see me” I answered :'(

I sat back down and continued to sulk while Hulk ripped off his shirt.  I quickly started to get excited again hoping against hope that I would be able to catch his shirt.  No luck again.  I was grumpy.

The match began and Hulk quickly got the advantage.  It was loud.  Everyone was screaming and cheering.  To slow things down Macho Man exited the ring and I immediately began yelling – taking out my anger of no high fives and no ripped shirt – on him.  Hulk chased him out of the ring.  Macho slid in first and when Hulk climbed in, Macho gave him a cheap shot to the head.  I was enraged.  For the next 5 to 10 minutes Macho ruthlessly pounded on Hulk.  Every time it looked like Hulk was going to fight back, Macho cheated again.  Come on ref he just pulled Hulk’s hair!  I shouted to my Dad, how did the ref not see that?!?

Then the unbelievable happened.  Macho was climbing up the top ropes; arms held high with his index fingers pointed skyward.  He leaped, hit the big elbow.  Oh my god, NO ONE kicks out of the flying elbow.  One, two, th… Hogan kicked out!  He began shaking his head, he was hulking up.  Macho tried punching him, but Hogan blocked it.  Then he wagged his finger in Macho’s face.  Hogan blocked the next punch then gave him three of his own.  Next thing I know he throws Macho to the rope, up goes Hogan’s big yellow boot; down goes Macho Man.  Hogan hits the ropes – I’m standing, screaming – drops the big leg and I’m yelling while the ref counts: one, two, three.  Hogan wins!  I kept screaming my head off and clapping so loud that my hands hurt.

“Ok Jamie, let’s go, the match is over” says my Dad.  Are you kidding me?!? It’s time for Hulk to wave his hand and cup it to his ear while he flexes his 24 inch pythons.  We can’t leave now!

Before I found my old ticket from the event that night almost 27 years ago, I wanted to confirm the date of the event.  I knew it was in 1989 and Hulk versus Macho was the main event.  A quick Google search and I landed at The History of WWE for 1989.  The first thing I did was search for Edmonton.  The WWF came to Edmonton 5 times that year.  I knew it wasn’t the first one in February.  The second time was in May, very close after Wrestlemania.  On this card Hulk also fought Macho Man; however, the website says it ended by Randy Savage winning via a count out.  Then I found the third event.  There it was, WWF Champion Hulk Hogan pins Randy Savage.  I immediately knew this was the event I was at.  A few hours later, I found my old WWF ticket and lo-and-behold it says July 8th, 1989!

Since then I have only been to a few other live events – including November 10th, 1997 (Raw is War the day after the Montreal Screwjob) where I now live in Ottawa (a story for another day) – and nothing beats the atmosphere of a live WWF, now WWE, event.

If you have a story to share about your first or any live event you’ve been to, please share your comments below.